When i first started yoga in London 16years ago, the students & teachers that attended class wore normal gym clothes…the craze for funky, bright, colourful “yoga” leggings hadn’t hit the UK yet…not yet. That craze however, was running wild in the US…and it always seemed unattainable to us mere mortals who worked hard to earn a living, because to purchase just one of  these “yoga” leggings you’d have to mortgage your house, maybe twice! So people just wore whatever. Nobody cared. It was all about the yoga.

And then something changed.

Perhaps it has to do with social media, Instagram, Facebook, Twitter, Snapchat and god-knows-what other social media platform is out there…but yogis all over the world started seeing US yogis with – and i must say – pretty cool “yoga” leggings…and i place quotation marks around the word yoga because there is no such thing as yoga leggings! But they have just been marketed that way – someone very smart got on the yoga craze and saw how huge this was getting and decided to get a piece of the cake. I mean why not? The thing is yoga began as a discipline that was passed on from teacher to student, who would then become the teacher and pass on their knowledge on to other students and so on and so forth…people didn’t pay for yoga back then, and i’m talking about a looooong time ago. Now u gotta pay for everything.

Anyway, i’m totally diverging. However, i do have a gripe about ridiculously priced yoga gear and clothing and equipment…i mean i know people have to pay for my classes, they’re not free, but they’re accessible to all (i think, i also do discounts for those who can’t 🙂 ) and i find it totally wrong trying to make big bucks thru yoga or using yoga to make money, that was not what yoga was intended for. But anyway…i digress…this post is about yoga clothes…and anyhoo from the US the craze travelled to all corners of the world…in some parts before others…and italy is one of those places where the craze probably arrived last. Don’t get me wrong. People here saw those leggings and wanted them – but they just were not available here…unless u had enough money to go to Nike or Adidas or Puma…u get me…but still they weren’t the same….they weren’t created with yoga in mind…so in order to be one of the few to own cool “yoga” leggings you had to mortgage your house, steal or rob a back and order them online from a US website or an Australian one – think shipping costs + a fee customs would charge….so you’re looking at well over 100 euros for just ONE pair of “yoga” leggings and honestly who can afford that? Doesn’t it somehow seem wrong? Very wrong?

Anyway – all of this just to say that – FINALLY  there is a shop in Milan that sells amazingly cool “yoga” leggings!!! YAY! It usually takes Italy a while to get with the times, but eventually they get there, thing is when they finally do, they are still behind!

BodyMelody is the name of the shop, and it is situated in via Sansovino 5, close to the metro stops M1 Loreto & Lima, parallel to one of the main shopping districts of Milan, Corso Buenos Aires.
They mainly cater for the Pole Dance, but they also have some items that can be used for yoga: leggings, capris, bras, tops and shorts! Obv when i came to know about this place (someone on fb asked me to like the page) and realised they had stuff that i could wear for yoga, i went straight away! Here’s a few of the items i got: 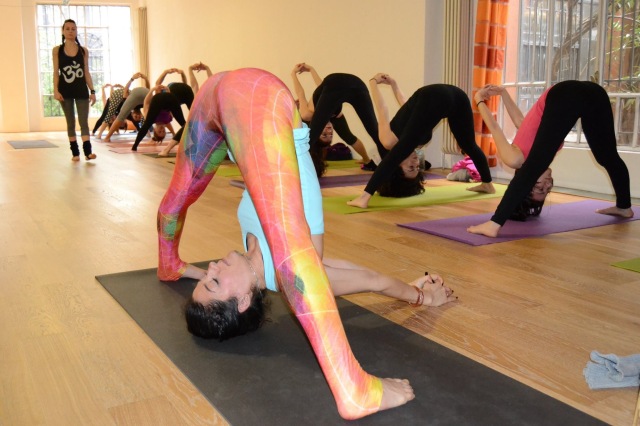 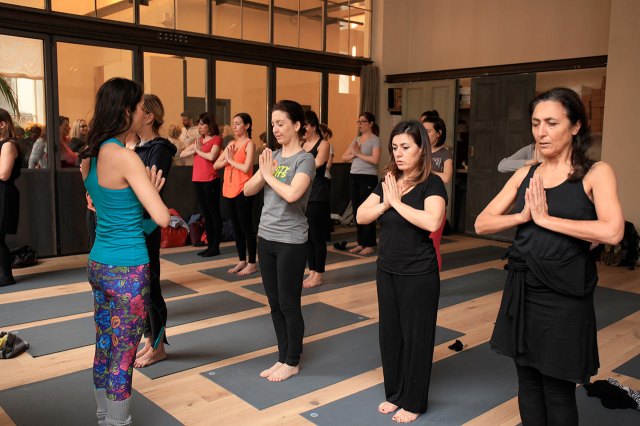 I also got a pair of California leggings Image & Space, but i haven’t got any pix of them yet! Photo’s to come…

Leggings are not free, but they also don’t cost an arm and a leg…they are sold at the decent price of 39euros, which i understand that for some, is still a tad pricey, but u won’t have so save up for a year to afford them, maybe just a month! 😉 Anyway, Tamara is incredibly helpful and they also speak english, so if you don’t feel like using your italian lingo, don’t worry, Tamara will make you feel at home! 😉

BodyMelody is a russian company who now have a shop in Milan! So enjoy and happy shopping! 🙂

PS. Not that you’ll get any perks or anything, but do mention to them, to Tamara, that you found out about BodyMelody thru me! Christiane, by taking to me, seeing my pix on Facebook or reading this blog on my website!

Christiane [a.k.a. Chris, a.k.a Krispy Anne]

Christiane has been practicing yoga for over 10 years. Her yogic journey began in 2000 as a student of Swami Nirmal (now at the Satyananda Centre in London) at the Fitness First gym in Kensal Rise, London. She experienced various teachers in different Fitness Firsts in Central London and around Clapham Junction before changing gyms and meeting Alexa Kho at LA FItness in Piccadilly Circus, London. Christiane attended Alexa's Anusara classes as well as her workshops. In January 2011 she enrolls in a 200hr Vinyasa Flow Teacher Training course with Rebecca Ffrench at YogaLondon. Vinyasa Flow is a modern form of yoga that comes from Ashtanga Vinyasa Yoga and follows Sri K Pattabhi Jois. She quickly become passionate of this discipline and wants to deepen her knowledge; this brings her to meet and attend many workshops with Stewart Gilchrist, Shiva Rea, John Scott, Danny Paradise...all very famous teachers around the world. Being in the presence of such teachers is a significant experience for Christiane, in terms of her yogic journey, personal transformation and growth as well as understanding of yoga. After 11years in London, she moves to Milan to deepen and continue her journey. In Milan she teaches privately (1:1 and group classes) as well as in various yoga and dance centers. Milan is where her love for Ashtanga Vinyasa deepens and grows, bringing her to attend workshops with Lino Miele, Sharath Jois and most recently Kino MacGregor...all original students of Guruji, Sri K Pattabhi Jois. All of this culminates with a long awaited and long overdue trip to India, the birthplace of Yoga. Here Christiane deepens her practice and knowledge of Ashtanga Vinyasa yoga by doing a 200hr Ashtanga Vinyasa TTC with Yogi Kamal Singh at Tattvaa Yogashala in Rishikesh India. After the monthlong course, her travels take her around India practicing with various other world renown teachers, namely with Sri V. Sheshadri in Mysore and with Rolf and Marci Naujokat in Goa. In 2013 Christiane decides to embark on yet another yoga adventure, this time in Aerial Yoga! The course was divided into two weekends: level I in April and level II in June, after which she becomes a qualified Aerial Yoga teacher. Teacher and student of yoga, writer, adventurous soul, creative mind, curious world traveler & lover of the outdoors. Current HQ: Milan, Italy.
View all posts by ctyoga →
This entry was posted in Ashtanga Vinyasa Yoga, Ashtanga Yoga, Corsi di yoga a Milano, ctyoga, Fashion, inspirational, Instagram, Milano Italy, Photo of the Day, Travels, Vinyasa Flow Yoga, workshop, Yoga Clothes, Yoga Dinamico and tagged acid, batik, body melody, body melody shop, bodymelody, bodymelody shop, capris, centrolistico, corso buenos aires, eka pada koundinyasana I, galaxy, handstand, image, inversion junkie, inversions, kapotasana, leg warmers, leggings, lima, loreto, mika, mika yoga, mika yoga clothes, milano, prasaritta padottanasana C, scorpion, space, tamara, via sansovino 5, vinyasa krama milano, yoga, Yoga clothes, yoga leggings, yoga student, yoga teacher. Bookmark the permalink.